Shandong reported 7 new confirmed cases of novel coronavarious pneumonia (NCP) between 0:00 and 12:00, Feb. 10, bringing the total number of confirmed cases to 466, 22 of which are in severe condition, 6 critically severe condition, and 64 were discharged from hospital. Another 17 new suspected cases were reported, bringing the current number of suspected cases to 80. As of 12:00 Feb. 10, one death was reported in the province.

See the table below for details (unit: case) 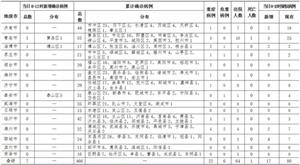