Shandong reported 10 new confirmed cases of novel coronavarious pneumonia (NCP) between 12:00 and 24:00, Feb. 13, bringing the total number of confirmed cases to 519, 16 of which are in severe condition, 10 critically severe condition, and 111 were discharged from hospital. Another 29 new suspected cases were reported, bringing the current number of suspected cases to 83. As of Feb. 13, two deaths were reported in the province.

See the table below for details (unit: case)： 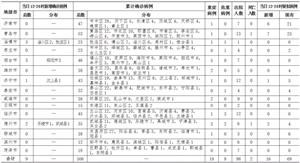