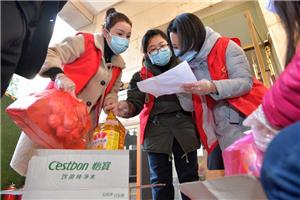 The rhetoric that some people have used to stigmatize China's quarantine measures ignored the basic laws of epidemic prevention and control in modern society, and worryingly politicized the issue of science.

As the battle against COVID-19 is at a critical stage, some outside noises have posed a threat of their own.

Since the outbreak, China has introduced the unprecedented lockdown of a metropolis at the center of the outbreak, applied stringent quarantine measures across the country, pulled extensive resources into hard-hit areas and shared information with the international community.

China made these efforts not only for the sake of its own people, but also for the people of the world. Viruses know no borders. Ensuring the safety of the world's most populous country is a key step to shield people in other countries from further crisis.

Faced with the spread of a contagion, relying on our community with a shared future becomes all the more vital.

Regretfully, some people outside of China have gotten the wrong message. Out of prejudice or habit, they vilify China's quarantine measures as a violation of human rights, smearing its release of information as not transparent, fanning unnecessary panic and causing overreactions. 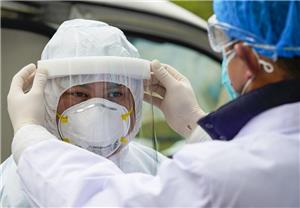 Rural health worker puts on a protective face mask with the help of a colleague before visiting a quarantined home in Taojiazhen Township of Jiulongpo District, southwest China's Chongqing Municipality, Feb. 7, 2020. (Xinhua/Liu Chan)

This rhetoric played up the side-effects of the quarantine, ignored the basic laws of epidemic prevention and control in modern society, and worryingly politicized the issue of science.

In fact, China's efforts are paying off. As a professional multilateral organization focusing on public health, the World Health Organization (WHO) sees the whole picture. It praised China's hard work as unprecedented and incredible, having helped prevent large spillover effects to other countries.

Outside of China, there are 526 laboratory-confirmed cases from 25 countries and two deaths, according to Feb. 15 figures from the WHO.

The Chinese people "are protecting the world from an even faster spread through their willingness to make sacrifices and their commitment," said Michael Schumann, head of the German Federal Association for Economic Development and Foreign Trade. "They deserve our respect and our active and energetic support."

When people's lives are in peril, discussing how to protect human rights is nothing but empty talk. In the face of a virus epidemic, applying strict quarantine measures is an absolute necessity. Without quarantine, how can people's lives be secured? 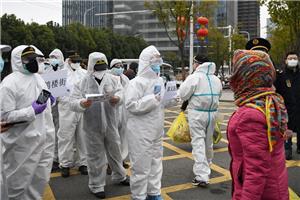 The speed and transparency of China's response is also impressive. After China detected the outbreak, it isolated the virus, sequenced the genome and shared it with the WHO and the world. The government holds daily briefings and updates the numbers of new infections, deaths and recoveries. It alters the statistical method to help patients get faster access to treatment. As leaders of many foreign governments and international organizations have put it, in many ways, China is setting a new standard for outbreak response. This is no exaggeration.

Now, China is fighting two battles: containing the epidemic and restoring momentum in its economy. How to steer the world's second-largest economy through the choppy waters of the epidemic is a severe test for China's decision-makers. China contributes nearly one-third of global economic growth. Properly handling the economy in this critical period will also leave a deep impact on the global economy.

Epidemic control is a global issue. Solidarity, not stigma, is needed to fight the common enemy of mankind. Vilification, malicious attacks on China, and politicizing public health issues will only undermine our strength against the virus, risk writing off previous gains, and harm the common interests of the global community.

The battle is still intense. It is time to push unhealthy emotions aside, and let science and unity take the lead.