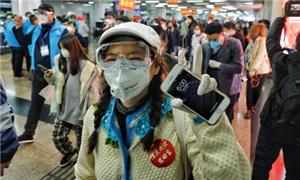 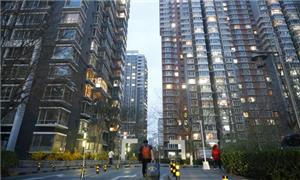 Beijing resident Feng Xiangqian takes the first train from Hubei to Beijing since travel restrictions were eased, and arrives at Beijing West Railway Station at 5:50 pm on Wednesday. Feng finally returned home in Beijing's Shijingshan district after being trapped for two months in Hubei amid the COVID19 outbreak. He will be quarantined at home for 14 days. Photo: Li Hao/GT

For the first time in more than two months, the city of Beijing on Wednesday received a group of more than 800 people who had been stranded in Hubei Province due to the novel coronavirus lockdown of the province.

The capital city, gradually coming back to normal life, has prepared the strictest epidemic prevention and control measures for the returnees to make sure no more infections.

Authorities lifted outbound travel restrictions on cities in Hubei except Wuhan starting Wednesday, allowing people from the province to return to megacities like Beijing and Shanghai where they usually work and live.

The first high-speed train, G488, carrying Hubei passengers to Beijing since the easing of travel restrictions arrived at Beijing West Railway Station at 5:50 pm on Wednesday.

Song Tingting, a member of staff with the Beijing station, told the Global Times on Wednesday that passengers from Hubei in the train were separated from other provinces' passengers in different compartments for the reason of epidemic prevention.

Those from Hubei needed to undergo temperature measurement both by equipment and by station employees to make sure that every passenger who leaves the station has a normal temperature, Song said. 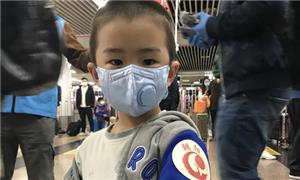 A 30-year-old man surnamed Ouyang from Huangshi who arrived at the station appeared excited on finally getting back to the city where he works after a prolonged stay in Hubei due to the epidemic.

He told the Global Times that before he departed, local authorities in Hubei prepared food and drinks for travelers like him.

A grassroots official in Beijing's Shijingshan district, who went to the Beijing West Railway Station to pick up passengers who live in his district, told the Global Times that after they pick up the residents, they would escort them home for further isolation under the supervision of community workers.

If they fail to observe the home isolation rules, they will be sent to a designated hotel for a 14-day quarantine, and the cost will be borne by themselves, the official said.

The Beijing government is cautiously embracing returnees from Hubei Province where the epidemic was first reported in China. Traffic restrictions are being gradually lifted in Hubei as local epidemic control work makes solid strides.

People who plan to return to Beijing from Hubei have to submit an application first via an app, and only those who are approved are allowed to return to the capital, Chen Bei, an official from the Beijing municipal government, said on Wednesday during a press conference.

For people who take trains, they will be sent by the Hubei government to designated train stations and then Beijing municipal government will pick them up on platforms upon arrival before sending them to local communities. For people who drive on their own, they will be examined with health QR codes and IDs and undergo inspections one by one when entering Beijing.

Less stringent compared with Beijing, other cities and provinces normally don't require people returning from Hubei to be quarantined for 14 days if they are healthy.

Hubei is one of the major labor exporting regions in China, and about 6 million Hubei residents work outside their home province. During this Spring Festival, 70 percent of them had returned to Hubei, where they were stranded ever since.