China's CPI up 2.5% in June, due to rising pork, vegetable prices

China's consumer price index (CPI), a main gauge of inflation, rose by 2.5 percent year on year in June, expanding 0.1 percentage points than May due to increasing prices of pork and vegetables.

The percentage was in line with a 2.5 percent rise tipped by a Reuters poll. Meanwhile, China's producer price index (PPI), which measures costs for goods at the factory gate, fell 3.0 percent from a year earlier, lower than the 3.2 percent contraction tipped by analysts in a survey by Bloomberg.

According to the National Bureau of Statistics (NBS), pork prices increased by 3.6 percent, reverted from a decline of 8.1 percent last month, affected by the tighter supply of pork due to factors such as the slower slaughter of live pigs and stricter requirements for epidemic prevention deployment and reduced imports.

"The production of the hog is still mainly affected by the pig cycle, an economic phenomenon referring to cyclical fluctuations of supply and prices of the hog. In my view, the peak of the pork price now has passed, and it will return to a reasonable price in the future," Bai Ming, deputy director of the Academy of International Trade and Economic Cooperation in Ministry of Commerce told CGTN.

Vegetable prices were up by 2.8 percent in June on a monthly basis due to the lack of supply in the short-term in some places, which are attributed to flood disasters and a new spike in coronavirus cases in Beijing's Xinfadi, the biggest wholesale market in Asia. Other categories in food such as seasonal fruits and eggs recorded a drop of 7.6 percent and 4.1 percent, respectively, in prices, contributed to stable supplies.

"Pork price is the main factor affecting CPI while flood and epidemic now only have an impact on some areas of China and mainly impact logistics," Liu Ying, a research fellow at the Chongyang Institute for Financial Studies at Renmin University of China, shared with CGTN.

Bai agreed that the impact of flood disasters and epidemics is limited and temporary, further explaining "the Xinfadi wholesale market in Beijing is just one of the distribution centers of agricultural products, not the production area. Agricultural products can also be given to consumers through other wholesale markets, which has been organized by the commercial department."

For non-food items, as the COVID-19 pandemic continued to affect travel, air ticket and tourism prices falling by 6.1 percent and 1.8 percent respectively. Clothing prices changed rebound from a 0.2-percent increase last month to a 0.2 percent decrease in June as summer clothing began to offer discounts.

On a yearly basis, food prices rose by 11.1 percent, an increase of 0.5 percentage points, affecting CPI rose by about 2.24 percentage points. Among foods, pork prices increased by 81.6 percent, beef and lamb prices increased by 18.5 percent and 10.9 percent, respectively. Fresh vegetable prices rose by 4.2 percent, while the prices of fresh fruit and eggs fell by 29.0 percent and 15.8 percent, respectively.

In the first half of the year, CPI rose by 3.8 percent compared to the same period last year.

"Although prices have fluctuated due to shocks from the epidemic and supply chain in the first half of the year, with floods receding, an improved epidemic situation, as well as the accelerating resumption in the second half of the year, CPI is expected to stabilize," Liu said. 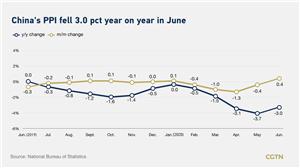 Although PPI declined three percent in June year on year, the drop narrowed down by 0.7 percentage points compared to the previous month.

In the first half of the year, PPI fell by 1.9 percent compared with the same period last year.

"The PPI in the first half of the year is indeed declining, as the international commodity market is under great pressure and the Chinese economy also contracted 6.8 percent in the first quarter. However, as the economy recovers, the recovery of PPI is inevitable," Bai said.

"But I think at present, the main reason for the return of PPI of China lies in the improved domestic demand, such as the implementation of infrastructure projects. The pandemic situation in the world has not been improved except in China. Thus, there is still a downturn in the international commodity markets and the rise of PPI may not be sustainable in the short term and the range is limited."

"Despite more than 200 interest rate cuts by countries around the world in the first half of the year, China still maintains a moderate monetary policy, relying more on fiscal policies and market-oriented reforms to stimulate the economy," Liu Ying told CGTN.

"It may not rule out the possibility of the central bank lowering the interest rate in the second half of the year in accordance with the need for resumption, but in general, the money supply will not constitute a major factor driving price increase," she added.

Besides the moderate currency supply, Bai Ming stressed that imported inflation pressure is also not particularly large. "For example, the prices of major raw materials and commodities are relatively low. In the first half of the year, a lot of crude oil was imported thanks to the low international prices. Thus, even if there are fluctuations in CPI next month or next month, they will not be converted into inflationary fluctuations."

"We expect CPI inflation to inch up to 2.7 percent year on year in July as the supply shock of the recent flooding in South China may more than offset the high base in July last year," Nomura Securities denoted in the latest research report.

PPI inflation could rise to -2.7 percent year on year in July, owing partly to the recent rebound in global oil prices and a low comparison base in July 2019, it further elaborated.