US’ efforts to woo Europe to contain China 'a daydream' 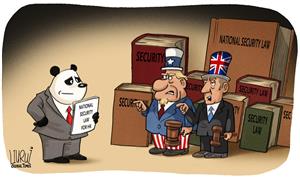 As US policy on China has become increasingly reckless and unrestrained, which is manifested in constant smears and sanctions, especially after the newly enacted national security law for Hong Kong, it has draw ire from rational voices within some European countries.

Whether it is in terms of domestic governance model or global governance model, the US and European countries - especially those represented by Germany - seem to be increasingly in conflict. Chinese experts pointed out that the US is losing support from more and more allies amid deteriorating China-US ties, as Europe has become accustomed to pressure from the US and its attitude toward China has become more evident.

Europe has realized that it is necessary to cooperate with China, but it has to make appropriate compromises to the US. However, it is impossible for Europe to take sides between the two superpowers, and a complete decoupling from China is impractical, they said.

Among these European countries, China's relationship with Germany, which is considered a cooperation model between big economies, has again demonstrated promising cooperation and understanding following the passage of China's national security law for Hong Kong. The new law was attacked and defamed by countries led by the US as a "violation of human rights" and "an omen of the city's death."

Chancellor Angela Merkel recently criticized the White House "As we are experiencing firsthand, you cannot fight the pandemic with lies and disinformation any more than you can fight it with hate or incitement to hatred."

In an interview with Germany newspaper Frankfurter Allgemeine Zeitung on Saturday, German Economy and Energy Minister Peter Altmaier said that Germany will not sever its trade relationship with China over the new law for Hong Kong.

The protection of and adherence to human rights remains the government's highest priority, and this also applies to China, Altmaier stressed. "I'm not the world's headteacher of morality, but I am convinced that countries like China will only be successful in the long term if fundamental principles of the rule of law are guaranteed."

Voices advocating a less hostile approach to China than what Europe sees coming out of the US and the need for more US-European cooperation on China have also been heard from other officials, following warnings from top US officials that the country's efforts against China intensify.

German Defense Minister Annegret Kramp-Karrenbauer, who spoke at the virtual European Union Defense Forum on Wednesday, said that "it's easy and it gives you a good feeling inside if you use strong words, but we also know that this approach is often one that blocks every contact and every possible influence."

She made it clear that China remains an important partner for the EU in dealing with important issues, such as climate change and trade. "If we see that China is trying to increase its influence in international organizations, not to further multilateralism but to push its own interests, then we must not weaken the international organizations," she said, in an apparent criticism of the US decision to withdraw from the World Health Organization.

Russia's Foreign Minister Sergey Lavrov also delivered his concerns at the international forum known as the Primakov Readings on Friday, saying that Russia is worried about the US stepping up accusations against China and hopes that the US will not cross the bottom line, China Central Television (CCTV) reported on Saturday.

Lavrov said he hoped China and the US will resolve their differences through diplomacy, and called on the US to abandon its usual approach of defaming and attacking other countries, choose to negotiate, and recognize China as a power.

It is clear to see that Germany's attitude toward China is different in the national security legislation this year than the German attitude toward the anti-extradition bill protests in Hong Kong last year.

In an interview with Deutsche Welle on June 3, Germany's Foreign Minister Heiko Maas pushed back against the "ganged sanctions" proposed by the US against China, saying they are not a wise move in the long run as they would hinder dialogue between Europe and China.

Maas had previously met with Hong Kong secessionist Joshua Wong Chi-fung in September 2019 in Berlin despite opposition from the Chinese government. But the German minister displayed a sharp turn in his attitude to Wong in the June 3 interview, saying Wong's opinions constitute separatism and do not conform to Germany's policies toward China.

"The reason why Germany showed a change of attitude is because the country has always stressed it is ruled by law. Like other countries which have their own national security laws, China can also formulate a national security legislation for Hong Kong," Sun Keqin, a research fellow at the China Institutes of Contemporary International Relations, told the Global Times on Sunday.

The change also comes at a time when Germany, which currently holds the rotating presidency of the European Union, faces a very important task this year, especially in the second half of the year: To reach an investment agreement between Europe and China and to form a unified policy toward China, Sun pointed out.

As China and Germany have always valued dialogue on the rule of law and human rights, it is entirely possible for the two sides to exchange opinions on China's national security law for Hong Kong through internal exchanges. At a critical juncture in the negotiations for the China-EU Investment Agreement, Germany obviously does not need to jump out and blame or press China, Sun said.

Analysts noted that the reason why German has always acted in a pragmatic way is that it went through World War I and World War II and experienced tremendous social and political changes, thus giving them a more profound understanding of ideology.

However, some other European countries, such as the UK and France, showed a more aggressive attitude toward China's national security legislation for Hong Kong.

Cui Hongjian, director of the Department of European Studies, China Institute of International Studies, said that the UK was inclined to prioritize its ties with China after Brexit, but it policies shifted after being cornered by the US to take a stance and amid some anti-China forces' hyping of Hong Kong issues within the UK.

The UK did not blindly follow in the US' footstep, Cui said, citing example of how the UK's policy-making deviates from that of the US within the Five Eyes intelligence alliance, so as to maintain a certain degree of autonomy. But the UK later found out the space to maintain that autonomy is narrowing as the US strengthened pressure on it.

Echoing Cui, Sun deemed the UK knows clearly that after Brexit, it cannot survive by depending only on the US. Cooperation with China is also very important.

Sun believes that the actions that the UK has taken regarding the national security legislation for Hong Kong are more symbolic and are completely different from the sanctions the US has imposed on China.

Analysts believe that German's rational attitude is able to exert influence on certain European countries, as it still shepherd the continent's economic development. The US' efforts to draw Europe to contain China as it did to the Soviet Union will turn out to be daydreaming.