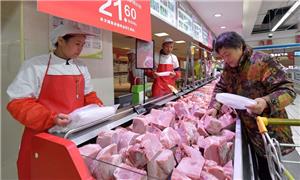 An industry analyst noted the main reason is the contrast of high pork prices against stable hog fodder prices. However, some raised concerns over impact of recent heavy rainfall in southern China on hog raising, which was later dispelled by the analyst who said this will have little impact on hog breeders as most of the large hog farms are situated away from low-lying areas. China's state flood control and drought relief commander lifted the flood control and emergency response from Level Ⅲ to LevelⅡon Sunday.

According to market data from industry website zhue.com, the average price of pork in China reached 38.27 yuan ($5.47) per kilogram on Saturday, up 110.85 percent compared with the same time last year.

New Hope sold about 2.12 million hogs in the first half of the year, growing 58 percent year-on-year, with accumulated sales revenues surpassing 7.41 billion yuan, up 246.6 percent compared with the same period last year.

Muyuan Foods noted the main reason for the increase in profits is the impact of ASF which resulted in a huge decline in hog production along with rocketing pork prices.

He predicted pork prices will drop in the second half of the year while consumer demand remains weak amid the coronavirus pandemic.

According to the National Bureau of Statistics on July 9, China's pork prices rose 3.6 percent in June month-on-month following a decline in May.

Gao Yuanfei, deputy CEO of Guangxi Yangxiang Co, in South China's Guangxi Zhuang Autonomous Region, is raising hogs in multi-floor hog buildings, claiming the model has resisted ASF since it appeared in China, though he showed concerns over hog production in the coming months. He added that the company's farm in Guangxi has not been impacted by the heavy rainfall.

"According to our survey of 326 pig farms which are raising 300 to 3,000 hogs in Guangxi, 56 of them still remained empty in May and the local hog production recovery rate is only 45.3 percent," Gao told Global Times, pointing out that these hog breeders were still fearing ASF and hesitated to boldly increase the number of hogs.

In terms of when hog production will be able to recover, Gao noted that any large investment into newly-built hog farms by big hog breeders may help.

Seeing a lucrative market, property developers in China, such as Vanke Co and Evergrande, have also entered the hog raising industry this year.