Bilateral relations between China and the Philippines have picked up momentum as both leaders reached important consensus on pursuing joint development while shelving disputes, Chinese State Councilor and Foreign Minister Wang Yi said on Tuesday.

"We need to cherish the hard-won friendly situation," Wang underlined while holding a video conference with his Philippine counterpart Teodoro Locsin. 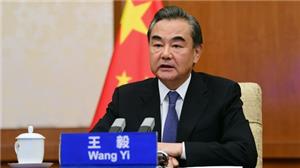 To better fight against COVID-19, Wang reiterated China's stance to continuously share its experience with the Philippine side, promote cooperation on R&D of vaccine and medicines, and put in place fast tracks for travelers between the two sides.

On the South China Sea issue, Wang said that the situation has been stable thanks to the joint efforts of China and the Association of Southeast Asian Nations (ASEAN), while the U.S. was pushing forward the militarization of the South China Sea.

Wang said China will continue to work with all parties, including the Philippines, to properly handle the maritime issues through dialogue and consultation.

China will continue to work with the Philippines in the spirit of the Declaration on the Conduct of Parties in the South China Sea to uphold peace and stability in the region, he added. 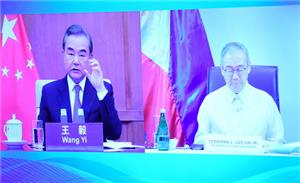 On his part, Locsin said the Philippines is willing to work with China to take the 45th anniversary of the establishment of diplomatic ties as an opportunity to further cement traditional friendship, and elevate cooperation in various areas.

Locsin once again hailed China for lending a helping hand to the Philippines to combat the virus, appreciating its medical teams and supplies.

Locsin reaffirmed that disputes at sea are not the sum total of China-Philippines relations, which will neither affect nor change the friendship between the two countries.