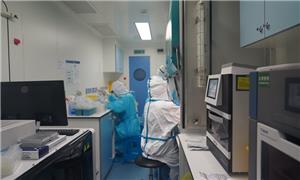 China has embarked on establishing P3 (protection level 3) and P4 labs to tackle COVID-19 since some deputies to the National People's Congress called to reinforce the research facilities.

In January 2015, the National Biosafety Laboratory under Wuhan Institute of Virology, or the P4 lab of Wuhan, finished its construction, making it Asia's first Bio-Safety Level 4 Lab (BSL-4). There are less than 20 countries in the world with BSL-4 labs. It passed the assessment of the National Health Commission of China in January 2018 and was put into use afterwards.

P4 labs are also under plan in other regions of China.

According to a report by the Nanfang Daily, quoting experts, China has some 40 to 60 P3 labs, and most of them are in health systems, agricultural departments, and customs. P3 labs in disease control authorities are usually used in emergency response instead of scientific research. Top Chinese scientific research universities cannot conduct some research due to a lack of P3 labs.

There are 1,500 P3 labs in the US distributed in medicine schools and hospitals, according to a Nanfang Daily report.

Guangdong has embarked on establishing some 25 to 30 P3 labs.

Wang Ruijun, director of Guangdong's Science and Technology Department, was quoted by the Nanfang Daily as saying at least seven P3 labs to be established should be able to conduct experiments on big animals. "I hope the demand for P3 labs could be met in the next three years and a P4 lab will be available to use after five years," he said, according to the report.

At a media conference on the prevention and control of COVID-19 in Beijing in May, Lei Haichao, director of Beijing's Health Commission, said Beijing will reinforce P3 establishment in the future.

Li Weimin, president of West China Hospital of Sichuan University, said during this year's two sessions in May that two P3 labs will be erected and put into operation in Southwest China's Sichuan Province within one year.