Soldiers, residents rise together to safeguard homeland from flood 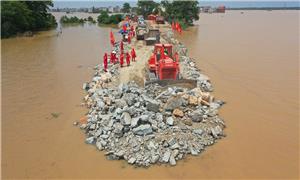 Workers and trucks are fixing the burst of a sandbar at Wenguidao, Poyang county of Central China's Jiangxi Province. Photo: Courtesy of the China Anneng Construction Group Co Ltd

The water level in Poyang Lake, China's second-largest lake, has kept rising and surpassed its highest record, bringing nearby cities and towns under severe flood risks. Soldiers and residents around Poyang Lake have been put on alert to prevent potential disasters and secure their communities.

Soldiers and officers from the armed police force in East China's Jiangxi Province reinforced the dam at Changjiangyu in Poyang county on Monday afternoon. The dam's safety has concerned the whole country as the Poyang Lake's water put the county under great danger of flooding.

Many of the soldiers, born in the 1990s and 2000s, expressed no fear, but confidence about preventing a potential disaster. "It's time for our soldiers to stand in front," one told the Global Times.

Shi Xingyu, a 9-year-old pupil, went to the Changjiangyu dam with her mother. The girl sang a song for the soldiers to express her gratitude. "Thank you. You are always in my heart," she sang.

Apart from the soldiers, residents have also devoted effort to flood prevention work. A group of "aunties" with an average age of 50 went to the frontline at Poyang Lake. They not only helped fill sandbags, but also cooked mung bean soup for the soldiers, CCTV reported on Monday.

Around 150 kilometers away, thousands of people are rushing back their home in Jiangzhou town in Jiujiang, a city in Jiangxi by the Yangtze River, after the town on Friday published a letter to residents working in other cities, calling them to help with relief efforts.

Jiangzhou has only 7,000 permanent residents, mostly children and the elderly. "Facing a period of damming more than 30 kilometers, we lack manpower… we call for Jiangzhou folks living and working outside to save Jiangzhou," read the letter.

By Sunday night, more than 3,000 people have returned to Jiangzhou.

China lifted the flood emergency response to Level II on Sunday as heavy rainfall severely impacted areas along the Yangtze River and Taihu Lake. The water levels of 19 rivers surpassed their historical record, the Beijing Daily reported on Monday. 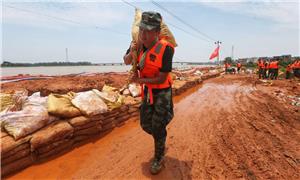 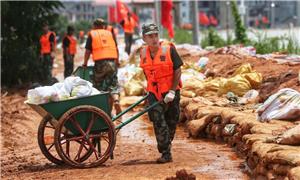 A soldier carries a sandbag at the Changjiangyu dam Photos: Cui Meng/GT 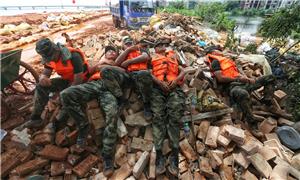