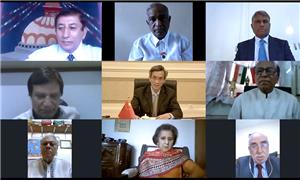 A screenshot of the webinar (photo: courtesy of Chinese People's Association for Friendship with Foreign Countries)

Some NGOs in South Asia and China are standing up against politicization and stigmatization of the COVID-19 pandemic and are calling for a joint effort in the virus fight, at a time when some Western politicians are utilizing the pandemic to attack other countries for political ends.

A joint initiative released by the Chinese People's Association for Friendship with Foreign Countries (CPAFFC) and friendly organizations in South Asian countries including India, Afghanistan, Bangladesh, Pakistan, the Maldives, Nepal and Sri Lanka at a COVID-19 themed webinar on Monday, appealed to "speak with one voice for justice" amid the unprecedented challenges brought by the pandemic.

"Recognizing that COVID-19 is indeed a common enemy for mankind, we appeal to the people in power in the world to put people first, and to respect life and science," read the initiative.

Participants at the webinar condemned the US' irresponsible pandemic response. "The US government refuses to allocate resources and energy to virus control. Instead does its utmost to create a political virus, shifts the blame, and allows the epidemic to spread," CPAFFC president Lin Songtian said in his speech, adding that "political viruses" cannot eliminate natural viruses.

Different from the US position of "America First" amid the pandemic, which reflects its infamous unilateralist and protectionist mindset, China and South Asian countries have been helping and supporting each other in fighting the virus, said representatives at the webinar.

China and South Asia are good friends and neighbors, said George Fernandes, chairman of the Indian China Friendship Association Maharashtra Chapter. "We are bound by the Five Principles of Peaceful Coexistence, [and we] strengthen solidarity and cooperation as well as people-to-people relations."

2020 marks the 70th anniversary of the establishment of diplomatic relations between China and India. It is believed that people of the two countries will maintain their friendship regardless of occasional friction such as the boarder clash in June, said the participant organizations.

India and China may not be in the best period [of their relationship] at the moment, but they are fighting together against the virus with their global-vision leaders, which helps bond the two countries together, Fernandes said.

Unfortunately, Western politicians and media seem reluctant to see a good relationship between China and India, as well as China and other South Asian countries, representatives said.

"They'd like to see a fight between us, and to see problems occur in this region," a representative said.

Following the "European century" of the 19th century and "American century" of the 20th century, the 21st century will be a century of Asians, said Altaf Choudhury, director of the Bangladesh-China Cultural, Economic & Mass Communication Center.

China and India are Asia's two largest countries in terms of economy and population, Choudhury said at the webinar. A good relationship and hand-in-hand work by the two countries will enable faster development of the whole Asian region, he added.

"We are going to become a super power, [but] some people won't like it," said Choudhury.

Mohamed Rasheed, chairman of the China-Maldivian Cultural Association, said that some media outlets are spreading false news and disinformation that is "extremely detrimental" to the solidarity of people in the Maldives and China.

"The people of the Maldives regard China as a friend in good times and in bad times," Rasheed stated. "China is a friend in-need and indeed."

Due to the global epidemic, it has dawned on the world that all human beings are in a community with a shared future, Lin said.

"No country can tackle this alone, and no one can be an exception," he added. "Final victory can only be achieved through solidarity and collaboration."