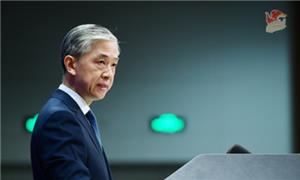 Frequent and deep communications between China and the EU reflects both sides' political determination and active actions in implementing the important consensus reached during the 22nd China-EU leaders' meeting, reflecting that the nature of China-EU bilateral relation is partnership, Foreign Ministry spokesperson Wang Wenbin said at a regular press conference on Thursday.

He referred to recent events between China and the EU, including the 8th High-Level Trade and Economic Dialogue, calls and video conferences between Chinese Foreign Minister Wang Yi and his counterpart in countries such as France, Germany and Italy as well as the 31st round of negotiations on a Comprehensive Agreement on Investment (CAI).

"Since the COVID-19 outbreak, China and the EU have kept supporting and helping each other maintained close communications and cooperation," Wang said, noting that the two sides will hold a series of important high-level exchanges and have many cooperation projects to boost.

China is willing to maintain close communications and coordination with the EU based on mutual respect and seeking common ground while shelving differences to promote the China-EU comprehensive strategic partnership to a new stage, he said.

China's Ministry of Commerce stressed the two sides' willingness to complete talks on the CAI by the end of 2020.

The 8th High-Level Trade and Economic Dialogue allowed the two sides to exchange views on the ongoing negotiations on a CAI following the last negotiating round which took place from 20-24 July.

The EU registered the significant progress made on level-playing field related issues, while highlighting that equally significant work still remains to be done on key issues such as market access and sustainable development, the Delegation of the European Union to China said in a press release sent to the Global times on Thursday.

Executive Vice-President of the European Commission Valdis Dombrovskis was quoted as saying "the current crisis gives us no other option but to work hand in hand with our global partners, including China. By pulling together we can recover more quickly economically, and make progress on areas of mutual interest such as trade and investment relations."

Dombrovskis said that the two sides need to address sticking points such as reciprocity in the way companies from the two countries are treated. "We will need to make further progress on these and other issues ahead of the next leaders' summit in the autumn," he said.