US should explain its global biomilitary activities amid intl concern: Chinese FM 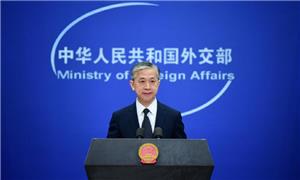 The Chinese Foreign Ministry on Tuesday urged the US to explain its biomilitary activities overseas, observe the Biological Weapons Convention (BWC) under the UN and stop obstructing negotiations for a protocol related to the convention.

The US should address international concerns, hold a transparent and responsible attitude and explain its military activities across the world, Foreign Ministry spokesperson Wang Wenbin said at Tuesday's routine press conference in response to a question on South Korean media reports about US military stationed in the East Asian country violating the BWC.

The military actions have triggered local protests demanding that the military laboratories be closed and the related troops dispersed.

The American military carries out bio activities in many countries and has sparked widespread suspicion and opposition, as what they do is non-transparent, dangerous and unreasonable, Wang said.

The US, a country that conducts the most biomilitary activities in the world, did not mention its conduct in materials submitted to BWC. The receiving countries did not know what the US military labs were doing, Wang said.

These activities are dangerous as many bio activities are related to high-risk pathogens. It would be a catastrophe for a receiving country, neighboring countries or even the whole world if an accident occurs, Wang noted.