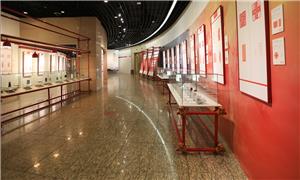 The exhibition of seals Photo: Courtesy of Zhao Nan

An exhibition displaying more than 200 seals depicting efforts to combat poverty and the COVID-19 epidemic kicked off at the China Millennium Monument in Beijing on Monday.

For the section dealing with the epidemic, seals depicting stories of Chinese medical workers providing support to Wuhan, such as at the Leishenshan and Huoshenshan hospitals, are on display.

These small seals vividly tell stories that occurred during the epidemic. "Looking at these seals made me relive the Chinese people's fight against the epidemic. I could feel the seal engravers' deep respect for those who fought on the front lines. I was deeply touched," Wu Meixin, a Beijing resident, said at the exhibition.

Walking through the other sections, visitors can examine seals dedicated to the country's fight against poverty. One seal depicts a Beijing textile company's move to Northwest China's Xinjiang Uygur Autonomous Region in 2016 to support the development of the local textile industry.

In addition to traditional materials such as wood, stone or copper, some seals also make use of new materials like graphite or fiberglass.

Although the paintings and calligraphy works on the seals are rather small, they still are able to depict rich content and convey a positive message to audiences.

The exhibition is set to run until October 24.