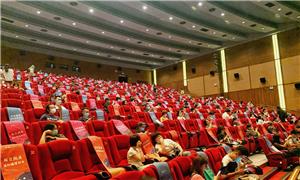 An audience of 200 at the China Film Archive, BJIFF’s main venue, before the screening of Russian film Persian Lessons (2020), its first screening in China, on August 29 in Beijing. Photo: Cui Fandi/GT

Cinemas in China will be allowed to fill theatres to 75 percent of capacity from September 25 under COVID-19 prevention and control efforts, according to an announcement released by China Film Distribution and Exhibition Association on Tuesday.

Real-name online reservations and contactless ticket sales will still be required. Theaters have to make reasonable arrangements and reduce the number of screenings, extend the interval between showing, and fully clean and disinfect the theaters. Movies will have to be scheduled at different times, to avoid audiences gatherings when entering and exiting, according to the announcement.

Yang Yang, a 30-year-old movie goer living in Beijing, is excited and happy at hearing the rise of cinema's operation capacity.

"It shows that theaters will be gradually operated as normal," Yang told the Global Times on Monday.

Yang is confident with the anti-epidemic work in cinemas and has twice been to see a movie in late August and early September. Wearing a mask for the entire movie period made Yang feel a little suffocated.

"I am looking forward to the day that we defeat the epidemic completely and I can enjoy the movie with popcorn and without a mask," she said.

China's cinema re-opened on July 20 at 30 percent capacity. The rate was raised to 50 percent on August 14.

The box office receipts have exceeded 5 billion yuan ($740 million) since they reopened. Some 140 million moviegoers have attended 11.22 million screenings nationwide, according to statistics on Maoyan, a Chinese movie-ticketing platform.