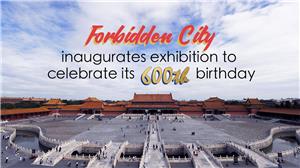 The Forbidden City, also known as the Palace Museum, on Thursday inaugurated an exhibition featuring its planning, layout, architecture and court life to celebrate its 600th birthday.

Titled "Everlasting splendor: Six centuries at the Forbidden City," the exhibition displays more than 450 cultural relics and historical photos in three halls on top of the Meridian Gate, or the Forbidden City's main entrance. Some of the exhibits have been displayed for the first time.

Since its completion in 1420, the Forbidden City served as the imperial palace of the Ming (1368-1644) and Qing (1644-1911) Dynasties, with 24 emperors living and ruling there. It stands today as the concentrated embodiment of thought about urban planning and palace construction in ancient China.

Following the timeline, the exhibition has been divided into three parts with 18 major historical events. The first part explains why the Forbidden City was planned and laid out as it is through the relationship between the imperial palace and the capital city.

The second part, "Inclusiveness," focuses on the Forbidden City's look in ethnic elements after it was taken over by ethnic Manchu ruler during the Qing Dynasty and Western architectural style after the 18th century.

The third part shows how the imperial palace was given new vitality after becoming a public museum and World Heritage Site and welcoming visitors both from home and abroad.

"The Forbidden City has a cultural foundation of several thousands of years, and architectural basis on the traditions of the Tang and Song Dynasties before evolving into its today's form," said Ren Wanping, deputy director of the Palace Museum and the general curator of the exhibition.

"I hope visitors perceive that the Forbidden City contains Chinese philosophical thought and humanistic spirit from our ceaseless culture passed down from generation to generation," she added.

The exhibition displays many rarely-seen cultural relics, including the Empress's Winter Court Coronet used on her wedding day and the Jewel-inlaid Gold Cup with "Jin'ou youngu" (Everlasting Territory) Inscription used by the emperor on Chinese New Year's Eve.

The ten Glazed Animal Ornaments, which stand together only on the eaves of the Hall of Supreme Harmony, the largest and highest-level building in the Forbidden City, have been displayed together for the first time. On previous occasions, they were shown separately.

Another treasure is the Lacquered Gauze, originally on the window partition in the south room of the Belvedere of Viewing Achievements (Fuwang ge). Painted with gold and silver, the exquisite fabric has six layers but it is easy for light to get through.

"This is the first time it is displayed for the public in the past over 200 years," said curator Zhang Jie, "Because of its fragile condition, it will be very hard for it to exhibit again in the future."

The exhibition will last till November 15.