Manchu embroidery, a stylish way to get out of poverty 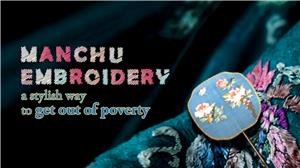 Manchu embroidery is one of the most exquisite styles of embroideries in China. Originally designed just for the royal family, it is now a way to help lift people out of poverty.

As part of the development and splendid history of the Manchu ethnic group, their embroidery was listed as a national tangible cultural heritage in 2008 and is now a key poverty alleviation project in its birthplace: Shenyang City, Liaoning Province, northeast China.

Manchu embroidery is much more complicated than standard Chinese embroidery, as it is known of its multi-dimensional and striking feature. 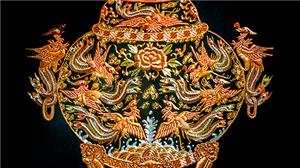 Manchu embroidery is much more complicated than standard Chinese embroidery, as it is known for its multi-dimensional and striking feature. /Xinhua

"Golden threads were very rare back then in the Qing Dynasty (1636-1912), and were used to symbolize nobility and power, so the embroiderer used it only for the royal families. The spiraling embroidery can make a pearl-like pattern, which is beautiful and atmospheric," said Yang Xiaotong, an inheritor of Manchu embroidery.

Various forms of Manchu embroidery, such as hanging pictures, cheongsams, fans, shawls and handbags have now become a calling card of Liaoning Province.

In order to carry forward Manchu embroidery and benefit the local people, the Liaoning Provincial Department of Culture and Tourism set up seminars for those who are interested in it, especially those who live in the countryside.

For women in rural areas, the seminar project is a very convenient way for them to learn skills and make money at home. Their works are bought by local companies and then sold on the market; some of them can make 20,000 yuan (about $3,000) out of it per year. 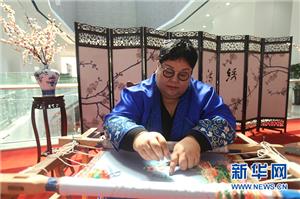 Yang Xiaotong, the inheritor of Manchu embroidery, is seen working on a designed piece. /Xinhua

As a handicraft full of Chinese cultural characteristics and special artistic value, Manchu embroidery is also beloved by many people outside the country.

Yang once put 200 embroidery pieces on display in the Louvre Museum in Paris, France, and other galleries in Europe.

"More and more foreigners are attracted by this kind of art form," said Yang. "There was once an Australian who came all the way to my workshop to see how those are made, and recorded a video for his family. I feel very gratified to see that Manchu embroidery has been welcomed by international friends outside China."