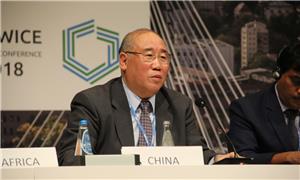 The central government has appointed China's top climate advisor, Xie Zhenhua, as China's special envoy on climate change, with observers describing his return as "answering the nation's call" when China needs a powerful and experienced figure to lead its climate negotiations with the US after the US rejoined the Paris Agreement.

The appointment shows that China attaches great importance to climate change work, and is committed to strengthening exchanges and cooperating with international society to address climate change challenges to jointly build a winning, fair and reasonable climate governance system, Liu Youbin, spokesperson of the Ministry of Ecology and Environment (MEE), said at a press conference on Thursday.

An office on climate issues has also been established, which will be affiliated with the MEE, the ministry confirmed Thursday.

Xie, 71, has participated in several international climate change negotiations and played a key role in China joining the Paris Agreement in 2015. In 2015, he was appointed as China's Special Advisor for Climate Change Affairs. He resigned from the position as special representative in 2019.

"The position as special envoy for climate change calls for a very powerful and experienced figure to lead the complicated work," Ma Jun, director of the Beijing-based Institute of Public and Environmental Affairs, told the Global Times on Thursday.

Xie has been working on global climate governance for a long time. He is "highly professional, experienced and well-connected globally," Ma said. "I worked with Xie several times, and I noticed the friendship and mutual respect between him and other senior officials on climate, such as Al Gore and the UK climate official."

Xie has been active on the global stage on climate change issues and has gained great recognition in this particular circle. US climate envoy John Kerry, who was appointed by President Joe Biden, said in early February that he expected to speak to Xie soon and called him a "leader" and a "capable advocate" for his country on the issue of global warming, Reuters reported.

Ma said that Xie's reputation was earned through his humility in treating people and toughness in defending China's stance on climate issues. "He has a deep passion on climate issues and is very reliable. He always wishes to promote exchanges and cooperation. When sharp conflicts occur in negotiations, he often serves as a mediator."

"He applies the art of communication. He firmly stands for China in negotiations, while cares for other countries' benefits," Zhan Anling, who used to be in charge of the press work for the Chinese delegation in at least five climate negotiations, told the Global Times on Thursday. "With his leadership and efforts, public opinion of China on climate change has been changed."

For some Chinese netizens, Xie appears to be an outspoken Chinese official who reflects the courage of engaging with his foreign counterparts on climate change issues. A video from nine years ago shows Xie, as the head of Chinese delegation, harshly criticizing developed Western countries, which went viral on Chinese social media recently.

"Are you qualified to reason with me? We are a developing country, we need to develop and eliminate poverty, we need to protect the environment. We've done all we could do, but you [Western countries] could not do it," Xie angrily told some Western countries at the Durban Climate Change Conference in 2011.

"Climate change might be one of the rare areas that China and the US could share their knowledge," Ma said. "As the US has appointed a high-level individual on this issue, China also needs a very experienced figure to face potential cooperation and confrontations."

Cooperation between China and the US on climate change is a global matter as the world is facing this issue, laying the fundamentals for deepening cooperation and dialogue between the West and the East on tackling this common challenge, Lin Boqiang, director of the China Center for Energy Economics Research at Xiamen University, told the Global Times on Thursday.

However, China still faces growing challenges in meeting its commitment of reaching peak emissions before 2030 and for carbon neutrality by 2060, the expert said, noting fossil fuels still account for 85 percent of the overall energy structure of China.

During the two sessions next week, China's most important political event, much more detailed roadmaps on how to achieve the goal of reducing emissions and of meeting the climate change goals are expected to be unveiled, as this year is also the first year of the 14th Five-Year Plan 2021-25.

"They will have more detailed requirements and specific goals for governments and industries in the roadmaps - for instance, upgrading the traditional industries and equipping them with cutting-edge technologies," Lin said.