COVID-19 vaccines approved for use worldwide, how are they different?

The U.S. Food and Drug Administration approved Johnson & Johnson (J&J)'s single-dose COVID-19 vaccine for emergency use on Saturday, the third vaccine that was greenlighted in the country after those from Pfizer and Moderna.

Other than the three from the U.S., four vaccines from China – two from Sinopharm, one from Sinovac and one from CanSino, Oxford-AstraZeneca's vaccine from the UK and Sputnik V from Russia, have also won approval from different countries.

A vaccine needs to afford at least a 50 percent protection rate to be considered effective, as mandated by the world's leading drug regulators and the World Health Organization.

Li Zhongming, a Chinese vaccine expert, told Science and Technology Daily that vaccines developed with different technical approaches would have different efficacy rates. As long as a vaccine has an efficacy rate above 60 percent, it is good to go. 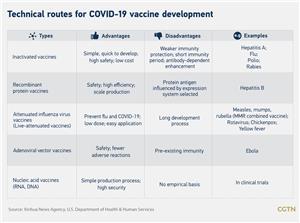 The inactivated vaccine is the most common approach. Its features are simple – rapid development, high safety and usually used to deal with acute diseases. Vaccines from China's Sinopharm and Sinovac are under this category.

An adenovirus vector vaccine, such as the ones from CanSino, J&J, Oxford-AstraZeneca and Russia's Sputnik V, is made by using a harmless modified adenovirus as a carrier and loaded into the virus' spike protein gene to stimulate the production of antibodies in the human body. It is safe, efficient and causes few adverse reactions.

Vaccines from Pfizer and Moderna belong to the category of mRNA vaccine. One major advantage of mRNA vaccines is the ease of production, especially when facing emerging diseases like Ebola and COVID-19.