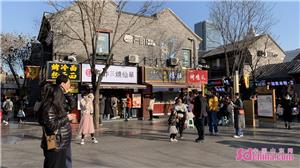 According to the news briefing held by the Information Office of Shandong Provincial People’s Government this morning, the 13th Five-Year Plan period has been an extraordinary five years for the development of Shandong’s culture and tourism. During the period, Shandong’s cultural and creative industry and boutique tourism industry were listed as one of the top ten industries for the transformation of new and old development drivers in the province. In 2020, the province’s 2,440 cultural enterprises above designated size achieved an operating income of 483.39 billion yuan, an increase of 7.8% and 5.6 percentage points higher than that of the whole country. The total tourism revenue and tourists visits in the province increased from 668.58 billion yuan and 660 million visits at the end of the 12th Five-Year Plan period to 1.1 trillion yuan and 940 million visits in 2019, up 64.5% and 42.4% respectively on year-on-year basis. In 2020, the province actively overcame the serious impact of the COVID-19 epidemic, received 577 million tourists and realized 601.97 billion yuan of tourism revenue, which recovered to 61.5% and 54.3% of last year respectively, taking the lead in the country.

During the period, Shandong has successfully held major events such as the China Qufu International Kongzi Cultural Festival, Nishan Forum on World Civilization, China Intangible Cultural Heritage Expo, Shandong Tourism Development Expo, and China International Cultural Tourism Fair, making the role of culture and tourism in promoting the transformation of the old and new driving forces in the province increasingly remarkable, and further enhancing the influence of Qilu culture.