China, S.Korea offer model for cooperation amid US bid to sow discord 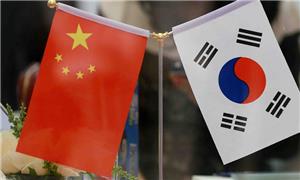 As the world seems to be facing an increasingly bumpy recovery road amid uncertain geopolitical environment, China and South Korea, which effectively handled the COVID-19 pandemic, have been ratcheting up efforts to form closer bilateral ties and expand cooperation in the post-pandemic recovery.

Specifically, the two sides agreed to strengthen coordination on establishing a mechanism for mutual recognition of health codes, advancing vaccine cooperation, and further expanding the scope of beneficiaries of the "fast track". They also agreed to jointly safeguard multilateralism and promote the early implementation of the Regional Comprehensive Economic Partnership (RCEP).

China and South Korea have enjoyed steadily improving relations in recent years, with broad room for the two sides to consolidate cooperation, such as the second-phase talks on the China-South Korea free trade agreement (FTA). There are also many areas where the two sides could enhance cooperation, including integrated circuits, 5G, big data, green economy and artificial intelligence.

The sudden onslaught of the novel coronavirus since late 2019 has badly damaged the global economy, with GDP slumped, cross-border trade interrupted, and personnel exchange suspended. The majority of the Asian economies could not shun the economic fallout.

With China and South Korea enhancing cooperation in epidemic prevention, production resumption and new growth areas, they can offer the broader Asia Pacific community a model for cooperation in the post-pandemic period, especially at a time when a US-led Western clique continues to seek to sow discord within the region.

As two vital players in the global semiconductor industry, China and South Korea, through close cooperation, could significantly shore up the resilience of the regional industrial chain. Also, with better epidemic prevention condition and great economic complementarities, the two countries could explore new economic growth potentials to win advantage in the post-COVID era.

South Korea is an export-oriented economy, while China is a nearby colossal market with promising growing prospect. Meanwhile, the RCEP has offered an ideal framework for the members to seek growth in manufacturing sectors, as well as service industries.

However, even as China and South Korea are seeking to bolster bilateral cooperation, the constant influence from the US cannot be ignored. Though the world's largest economy has deeply fallen into the quagmire of raging epidemic, human right crisis and economic dilemma, it seems hard for the country to accept the peaceful development of China. Frequently using non-market practices and sanctions, Washington has seriously hindered the vitality and resilience of the regional value chains and economic integration.

As China and South Korea have shown, it is crucial for Asian economies to remain aware of the danger of any skewed strategic choices, such as taking sides or trying to be opportunistic. As some countries and regions across the world are facing resurgence of the epidemic, it's hoped that regional economies can discard geopolitical mindset, comply with economic rules and pursue win-win cooperation based on mutual respect of each other's core national interest.

The article was compiled based on an interview with Shen Minghui, secretary-general of the Center for APEC and East Asian Cooperation with the Chinese Academy of Social Sciences. bizopinion@globaltimes.com.cn