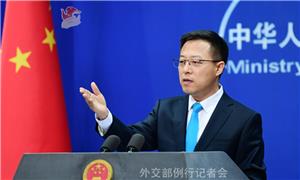 Chinese foreign ministry on Wednesday listed 'five sins' of the US human rights record, calling on the US to cast aside arrogance and bias, following US State Department spokesperson Ned Price's remarks on Xinjiang.

Price at a Tuesday press conference repeated Washington's concerns over "human rights violations" in Xinjiang which the US deemed "genocide."

The US is throwing mud on others to divert attention from its own bad record on human rights abuses, Zhao said, listing colonialism, racism, exporting turmoil, interference and double standards as "five sins" the US has committed.

The US conducted systematic genocide and massacre of Indians, committing terrible crimes against humanity. In the century after the founding of the US, the US expelled and killed Indians through its Westward Expansion, resulting in the Native American population dropping from 5 million by the end of 15th century to 250,000 in early 20th century.

The racism problem in the US is comprehensive, systematic and enduring. The UN Committee on the Elimination of Racial Discrimination pointed out long ago that African Americans face systematic discrimination in health, employment, education and justice in court. Hate crimes against Asians have increased by 150 percent since March 2020. More than 100 countries criticized the US' human rights problems and urged it to solve them when the UN Human Rights Council reviewed the US' human rights report.

The US also continuously exports turmoil to other countries. Since 2001, it has initiated wars or military operations in some 80 countries under the name of "anti-terrorism," resulting in the loss of 800,000 lives, including 330,000 civilians. Tens of millions of Afghans, Iraqis and Syrians and many others have become homeless refugees. With US and Western support, the Arab Spring left many West Asian and North African countries in turmoil.

The US has also long claimed that "human rights override sovereignty" and ignores the UN Charter's non-interference principle. It also imposed unilateral sanctions on developing countries, creating severe humanitarian crises. "Can the eggs remain unbroken when the nest is totally ruined? Can citizens' human rights be guaranteed when a country loses sovereignty?" Zhao asked.

Zhao pointed out that double standards were the US' fifth sin. It ignored the reality of a prosperous Xinjiang and the harmony of 25 million residents, and pinned the label of "genocide" onto China based on a few perjurers.

How does the US government, which is tirelessly "taking care of Xinjiang Muslims," deal with its own Muslims? Zhao noted that the US allowed Muslims to be targets of white mobs and mosques to be vandalized after 9/11. The US is also the only country that put in place a "Muslim ban" after the previous administration issued such executive orders. An American poll suggested 80 percent of respondents believed Muslims are discriminated against in the US.

The US has self-deceivingly claimed itself to be a model of human rights, while playing double standards on the topic and using it as a tool to maintain its hegemony. "We advise the US to cast aside arrogance and bias, face up to and reflect on its own serious human rights problems, and take actions to solve them rather than pointing fingers at other countries," Zhao said.