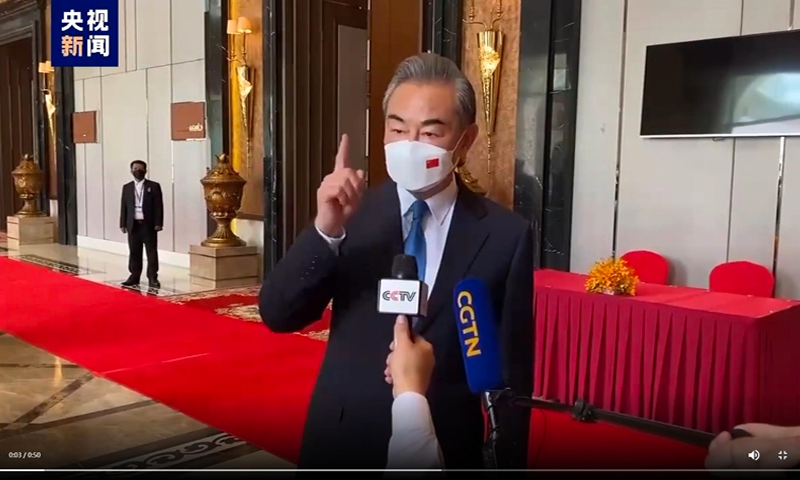 Talks between the Chinese and Japanese foreign ministers, which were reportedly scheduled for Thursday afternoon on the sidelines of ASEAN events in Phnom Penh, have been cancelled, after Japan with other Group of Seven (G7) members and the European Union (EU) issued a statement that unjustly accused China over the Taiwan question, a spokesperson of the Chinese Foreign Ministry confirmed on Thursday afternoon.

Chinese observers urged Japan not to blindly follow and support the US, and warned of another potential blow in bilateral ties. They believed Japan's decision to serve as a US vassal on this issue exposed the country's goal of using the Taiwan question to expand its own military capacity.

"China will no longer arrange talks between Chinese and Japanese foreign ministers in Phnom Penh," said Hua Chunying, spokesperson of the ministry at a regular press briefing on Thursday, condemning the joint statement issued by the G7 foreign ministers and the high representative of the EU as "fueling the US' violation of China's sovereignty."

"Japan bears historical responsibility for the Taiwan question and is in no position to make irresponsible remarks on it," Hua pointed out.

Historically Taiwan had been under Japanese colonial rule for 50 years, which brought great misery to Taiwan residents.

US House Speaker Nancy Pelosi's visit to the island of Taiwan, which seriously violated the one-China principle and China's sovereignty, has sparked joint military exercises around Taiwan by the Chinese People's Liberation Army (PLA) .

The G7 statement said they are concerned by the "threatening actions by China" across the Taiwan Straits, which "risk unnecessary escalation." The statement called on China not to unilaterally change the status quo by force in the region, and to resolve differences by peaceful means.

At a Thursday press conference, Chinese Ambassador to Japan Kong Xuanyou urged Japan to recognize the grave harm of Pelosi's Taiwan visit, honor its commitment in the four China-Japan political documents, refrain from blindly following the US and making wrong remarks on the Taiwan question, and stop sending wrong signals to the Taiwan secessionist forces.

Japan's involvement in the irresponsible G7 statement has ruined the talks between Chinese and Japanese foreign ministers, and Japan should bear the responsibility for and shoulder the consequences of the cancellation, observers stressed, noting that the cancellation also reflected China's anger toward Japan, as well as the further deterioration of bilateral ties.

Da Zhigang, director of the Institute of Northeast Asian Studies at the Heilongjiang Provincial Academy of Social Sciences, told the Global Times that Japanese politicians have always flirted with the Taiwan question, and have tried to use the issue as well as the Ukraine crisis as excuses to increase its military spending.

The country is also pushing hard to link the Taiwan question to its alliance with the US as a bargaining chip to stoke geopolitical tensions, the expert warned.

After Pelosi visited the island of Taiwan despite China's strong opposition, the international community, including the United Nations and many countries, reaffirmed their adherence to the one-China principle, voicing discontent and condemnation of Pelosi's provocative visit.

However, unlike South Korean President Yoon Suk-yeol, who appeared to have snubbed Pelosi during her visit to Seoul on Thursday, Japanese Prime Minister Fumio Kishida reportedly plans to hold talks with Pelosi in Tokyo on Friday and is likely to reaffirm the importance of peace and stability in the Taiwan Straits, according to Japanese media.

There is a sharp contrast between the leaders of Japan and South Korea regarding Pelosi's visit to Taiwan region. Regardless of China's condemnation, sanctions and even military exercises as countermeasures to Pelosi's Taiwan visit, Kishida still plans to meet Pelosi, which would damage China-Japan relations, Da warned.