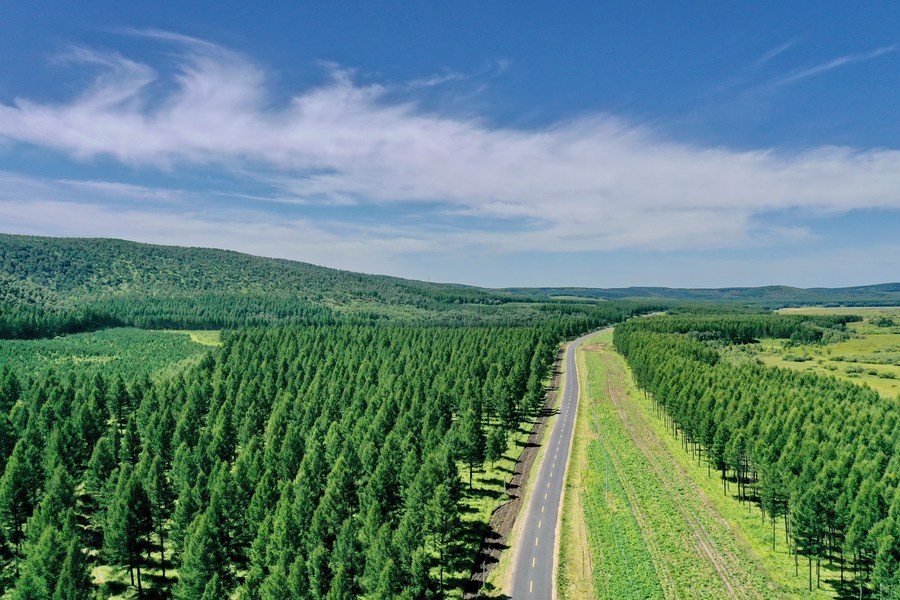 China ranks first globally in the land area of planted forests and forest coverage growth, contributing one-fourth of the world's new forest area in the past decade.

The secret behind the rapid growth of China's green landscape lies in its large-scale greening campaign, including conserving existing ecosystems, adding new forests, grasslands and wetlands, and fighting desertification.

According to the National Forestry and Grassland Administration, the accumulative afforestation area reached 64 million hectares over the past 10 years, while 11 million hectares of grassland were improved and more than 800,000 hectares of wetlands were added or restored.

From the tree planting programs to the world's largest artificial plantation, the Saihanba mechanized forest farm, China has been striving to build a "Green Great Wall" to protect the ecological environment.

China designated March 12 as National Tree Planting Day in 1979, and Chinese citizens have voluntarily planted approximately 78.1 billion trees across the country between 1982 and 2021, according to official data.

The COVID-19 epidemic did not keep cities from planting trees. Some instructed volunteers to keep "a safe distance" when planting trees, while others assembled small groups of volunteers to plant trees on behalf of hundreds of public-spirited residents.

Besides the offline planting activities, the country's internet-based greening campaign known as Ant Forest allows residents to adopt trees by making contributions online or garnering enough credits by performing low-carbon activities like taking public transportation, in exchange for a real tree being nurtured in their names.

By the end of May, more than 550 million people had participated in the project to plant over 200 million trees, reducing via low-carbon activities the equivalent of 12 million metric tons of carbon dioxide emissions.

In recent years, China has also built a protected-area system with national parks as the mainstay, supplemented by nature reserves and nature parks.

Saihanba in northern China was once an imperial hunting ground and degraded into an area of barren wilderness. Thanks to consistent efforts by three generations of Saihanba foresters, it has now become a national forest park and nature reserve, with a total forest landscape of nearly 77,000 hectares.

In addition, the restoration of mangrove wetlands in the coastal area of Shenzhen, Guangdong province, provides a carbon sink and ensures that the total area of mangroves will gradually expand, reversing the trend of ecological degradation of the mangrove wetland system. Carbon sinks are things such as plants, oceans or soil that absorb more carbon from the atmosphere than they release.

China's efforts to expand its forest area and improve forest quality have increased the ecosystem's carbon sink, contributing to achieving the country's target of peaking CO2 emissions before 2030 and achieving carbon neutrality before 2060.

China is expected to continue to blaze an eco-friendly trail for the world's green development, with the aim of increasing the forest cover to 26 percent by 2035 and becoming a leading country in forestry by 2050.